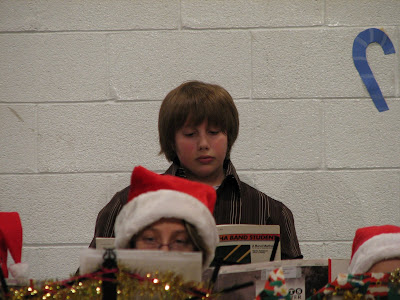 last night was joeys first ever band concert...he was SO excited!!! he plays drums and just couldn't wait to show us how well he does. he was a little irritated with the other drummers, they kept fooling and he was afraid they were going to make him look bad, lol.

the concert was band and chorus with band being first. joey wanted us to stay and watch the chorus so we did. during the very first song this mother started yelling...not just a normal yell but like a "yeow yeow"...then she yelled "smile shane, it wont break your face"...shane, i take it, was her son that was in chorus. she proceeded to scream, yell and holler the entire concert...carrying on like a total freaking idiot. it didn't take me long to realize she must have been drunk. why in the WORLD would you ever go to your sons chorus concert drunk? i just dont understand it. the poor boy looked like he was going to burst into tears...and i wanted to say really mean things to her. and my mom gave her a super mean look lol... 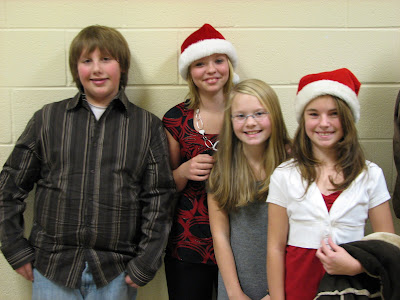 after the concerts were over i asked joey if he wanted me to take pictures of him with his friends. i dont know why i always just "assume" it's going to be boys. welp, here is the picture we got of joey and his friends. as you can see, joey is the ONLY boy there. look at his face, that look just says it all huh?