when i was a teenager, i couldn't wait to turn 16 and start dating.  i actually didn't know there were any other options and had never heard of courtship.  i had a few long term relationships, got my heart broken and accumulated suitcase after suitcase of emotional baggage.  those emotional scars would shape and transform the person i was.

as i've grown older, i've purposely learned more about courtship.  courtship is also a topic that’s important to me because i think a lot of Christian young people have had their hearts broken through dating.  as a mama, i want to protect my kids from that.  i'm purposely trying to cultivate a courtship mindset in my littles.

like I said earlier, anyone who's played the dating game knows that a broken heart or hurt feelings is part of the package. it's unavoidable, period. you place your heart in the hands of different people in hopes of YOU finding the one. doesn't sound very wise, does it? you will, undoubtedly, end up feeling rejected, hurt and abused.

the alternative?  courtship.  what is courtship?  let me try to explain it, from what i've learned.  now, i'm not an expert by any means.  so if you see something i've wrongly stated, please correct me.

*  courtship involves one guy and one girl.

*  courting is a commitment that this is the person you want to consider the next step with,  you are both ready to consider marriage.  which means courtship isn't entered into during preteen or early teen years.

*  the young man initiates the process.  this is something our world has gotten away from.  these days, girls and boys ask each other out.

*  courting is learning about selflessness, sacrifice, loyalty and faithfulness.  what you put into practice before you marry, is what your marriage will end up being a reflection of.

*  the couple are getting to know each other with the purpose of considering each other as potential spouses, not just someone to go have a good time with.

*  the girls emotions are protected.  if the young man has no intentions of marrying her, then courtship isn't entered into.

*  the couple is always chaperoned.  we don't want to put our kids in horrible tempting situations that are too close for comfort. expecting anyone to resist the temptation for sexual sin when alone with a boy/girlfriend as their relationship grows deeper is a stretch. they have chosen to remain pure until marriage, but that doesn't mean the temptation won't be there.  just because our littles love the Lord doesn't mean they are immune to sexual temptation.

*  the couples parents provide advise and guidance.  we need to be extra involved in their lives, talking to them, being their friends, advising them, protecting them.  what we don't need to do is send them alone in a car with their girlfriend or boyfriend for the evening.

*  there is accountability to others in the relationship.

*  the girl's father is the authority in the process, as his main goal is to protect his daughters heart. 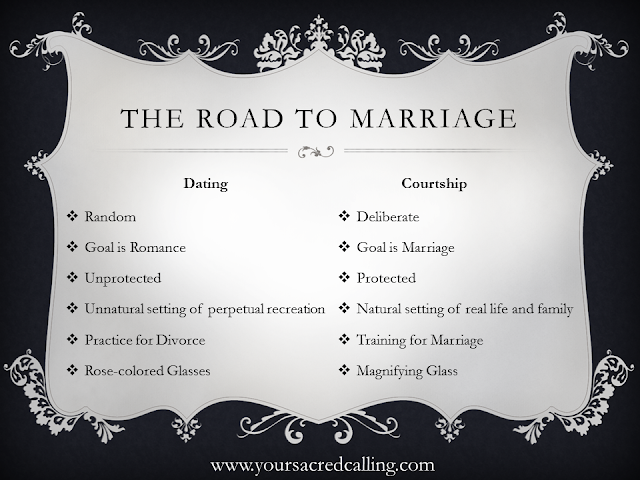 marriage is a very big deal and we need to treat it as such. the world today views marriages as disposable. marriage is a lifelong, God honoring covenant. it should not be entered lightly and it shouldn't be viewed as something one step above dating. marriage is a picture of Christ and His bride. when our marriage falls apart, what picture are we showing?

so, this is my opinion and outlook on courtship. hopefully through this you'll learn a little more about it, as i have. and hopefully you'll consider it for your littles as well.