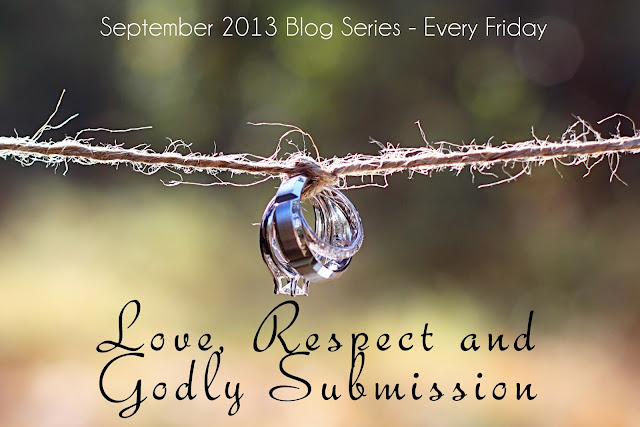 we've all heard the saying "men are from mars, women are from venus".  we all know that's not true, obviously.  but what is true is God created men and women equally but differently, very differently. we have different designs, different roles and different responsibilities.

God created men with a need to have respect from their wife.  Women were created with a desire to receive love from their husband.  so many times during an argument a wife will react without respect which will make the husband react without love.  that creates an ugly, vicious cycle.

so, i know this girl who has a hot, quick temper and a big, fat mouth and she can cut to the bone with words.  she grew up speaking her mind, using harsh words to get her point across. it didn't mean there was a lack of love for that person, it simply meant she had a point to make. fast-forward to current day.  we now live in an age where it's common and popular to portray men as idiots, fools and overgrown adolescents. think of how many sitcoms feature an "inadequate husband and wife who knows everything". and i absolutely admit, i have given in to the "how in the world would men ever survive without us" dynamic. Biblically, i would probably be stoned for my insolence. my husband is a pretty easygoing person, which made it easy for me to step into the role of dictator and look down my nose at him. i tend to micromanage and control and nag and critique. it's my nature, but it's not respectful—or loving! and it is something this strong-willed wife is working on, daily.

God’s design for marriage is laid out in Ephesians 5. remember last week we revealed that our marriage was designed specifically to mirror our relationship between Christ and His church. God intended marriage to mirror His relationship with the church so that we could basically be a testimony to others and SHOW them what God is like. that should change the way we look at our marriage.

Each one of you also must love his wife as he loves himself, and the wife must respect her husband.
Ephesians 5:33

i've read this verse over and over again. it doesn't say respect your husband only when you feel he deserves it, it doesn't say he has to GIVE respect to GET respect and it's certainly not up to us to deem when he is worthy of it. God was pretty clear with this verse, the wife MUST respect her husband.  period. unless there is a Biblically moral issue at stake (in which God’s authority will supersede our husband’s).


Pleasant words are as an honeycomb, sweet to the soul, and health to the bones.
Proverbs 16:24

so, i am basically a pro at pointing out my husbands faults and failures. i can pick up on disrespect lickity-split when it's coming from someone else but can't see when i'm being totally disrespectful to my husband. if it takes you a while to catch on like me, sometimes it makes it a little easier when you can read a list. so i spoke to various Christian husbands and asked them what they saw as disrespectful.  i've composed a little list of their answers.

as wives, we have so much power to destroy our husbands or to build them up. we need to learn to be respectful wives who value our husbands’ leadership. we need to honor Christ with every word and action! i would bet if we showed them more respect they would show us more love. when a wife respects her husband it deepens her love for him. so really, it's a win win situation for everyone :) lots of respect and lots of love, sounds pretty amazing to me.  Godly submission and respect not only adorns the gospel; it makes us beautiful as well.