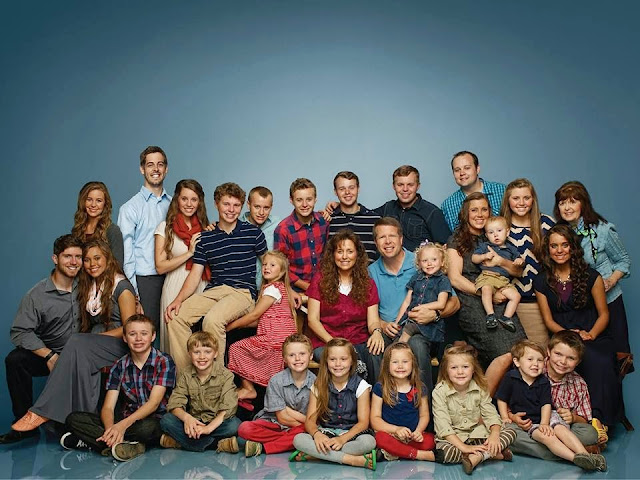 This is a blog post I never thought I'd be writing, and one I certainly don't want to write. By now, I'm sure everyone in the world has heard of the Josh Duggar scandal. He's the oldest son in the “19 Kids and Counting” family, Jim Bob and Michelle Duggar. And it's came to light, through the media of course, that he did some very bad things a long time ago. Apparently, when he was 14, Josh fondled several young girls, including a number of his younger sisters.

If you know me, you know I'm a Duggar lover.  I DVR every show, follow them on Facebook and Instagram.  I absolutely adore that they aren't afraid to show their faith on TV and many times put that faith in action.

My first thought when I heard this  was disbelief.  I actually thought the media was again creating some crazy untrue scandal, that they're so famous for.  So I dug a little deeper and actually found the police reports online {with names crossed out} and read it for myself.  While processing that, through shock and disbelief, I settled on this...I'm not going to cast stones.

Years ago, after Josh admitted to these acts, his parents presented the situation to their church’s leadership, and Josh was sent to a family friend in Little Rock where he spent several months doing physical labor. When he came home, his parents brought him to a state trooper. The trooper talked to the boy, but no arrest was made. A police report was filed, though, and Josh and his sisters received counseling.

The behavior stopped there, and Josh has been upfront about it to anyone who actually needs to know this information. According to his wife, he confessed his past sins to her and her parents well before they were married.

What the family did not do was take out a full-page ad in the National Enquirer announcing his mistakes to the world. But last week it was leaked it to a tabloid, and the whole “scandal” exploded all over the media.

For years, the opponents of the Duggar family have been eagerly looking for something, anything, that they could show the world. They've been dying to label them as hypocrites, bigots and nothing but a cult.  I'm sure they were pleased as punch as this story took off through the media like wildfire.  And when they heard of the harsh, long-lasting effects it's had on the Duggars {Josh has since resigned from his job and their show has been canceled} I'm sure they were wringing their hands and licking their lips.  Finally, they could broadcast to the world what they've known all along...the Duggars aren't what they profess to be!

In all actuality, this has shown me the opposite.  They are exactly what they profess to be!  Let me explain below.

They are Christians.  They live by their convictions, in defiance of cultural trends, and clearly bestow a strong faith in all of their children. And yes, even Christians sin {see below}. There are so many comments, Facebook posts and blog posts from people that are shocked that a child from a Christian family would do such things. While it is always alarming when we find out about our children’s sins, we should not be surprised. We are all born with a sinful nature. We should not be shocked that this occurred in the Duggar’s home, we should be thankful to God our household has been spared. And pray that He would keep us and our children from falling.

They are sinners.  They've not once claimed that their Christianity also meant they had perfect holiness.  It's actually because of our sinful nature that we need Him desperately.  When we sin {and we all do}, it doesn't discredit or disprove anything, it emphasizes just how MUCH we need Him!

They are parents.  As a parent, you make daily decisions that affect your family.  Jim Bob and Michelle made a decision on how to best handle the situation for them. As a parent, you have to think whether your 14 year old son deserves to have his life ruined over his mistakes. Maybe you’d decide that he does. I'm not sure I'd agree with that.

Here is my question...How many of you would broadcast the sins of your children to the whole world? Would you be willing to publicize your own darkest moments? I know I surely wouldn't.

It's easy to criticize when we're pointing the finger at others.  But praise the Lord it's not reversed.  What would you do if in the blink of an eye, all the fingers were pointing at you?  Would you still feel people were justified in their opinions?

For all have sinned and fall short of the glory of God.
Romans 3:23