The Good, the Bad, and the Grace of God {Book Review} 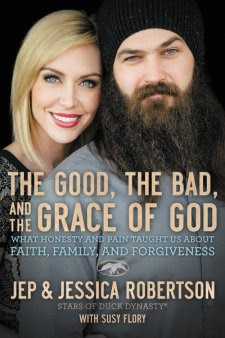 The Good, the Bad, and the Grace of God
What Honesty and Pain Taught Us About Faith, Family, and Forgiveness
By Jep and Jessica Robertson, with Susy Flory


A Moving Story of Redemption and Second Chances

Jep Robertson, the youngest son of Duck Commander Phil Robertson, and his wife, Jessica, open up about their personal trials, their early years together, and the challenges that might have destroyed them both had the grace of God not intervened. Jep describes being molested as a child and his reluctance to tell anyone until only a few years ago, his downward spiral into drug and alcohol abuse, and the eventual intervention of his family. Jessica shares about the difficult failure of her first marriage while still a teenager and the hurt that came along with it, much of it from the church. Her insecurities spun out of control as she wondered whether she would ever be good enough or pretty enough. This book is their love story but, more importantly, their love story for God.

In this household, we love Duck Dynasty. They love God, guns, country, truth and they are silly. Sounds pretty similar to our fam. Not to mention their beards, which my husband also sports. There aren't that many shows that promote faith and prayer and when we find one that does, we become faithful viewers.

I took this book on vacation with us, and dove into it straight away. I was excited to learn more about this family who’d already endeared themselves to me through their television series and their display of faith. I wasn’t disappointed. The one unique, refreshing, and comforting quality that recurred throughout the book was the raw honesty and transparency. Jep and Jessica are very candid, holding nothing back, while they share. Written in first person, alternating chapters, I love how this book flows. It’s like sitting in on a conversation. The chapters are also short which is how I prefer it, it holds my attention that way.

This is a true story of overcoming addiction, struggles and obstacles. It's a story of redemption, forgiveness and grace. Jess and Jep teach us about God’s love and His ability to save us, even from ourselves. I have to admit, I shed more than a few tears throughout this book. They share their imperfections and struggles and show that they’re truly ordinary people with an extraordinary story of God’s forgiveness.


This book was provided to me free of charge by Book Look in return for my honest review. The opinions I have expressed are my own.

Jep first met Jessica in 2001 and they were married within two weeks of announcing their engagement. Jules Jeptha “Jep” Robertson is the youngest son of Phil and Kay Robertson from A + E’s hit series Duck Dynasty. Jessica grew up hunting with her father on the weekends in the woods of Louisiana and previously worked as a licensed real estate agent. Jep and Jessica are proud parents of 4 children: Lily, Merritt, Priscilla, and River.