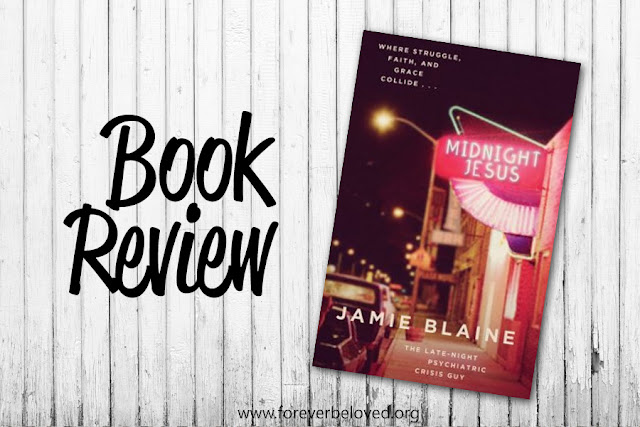 Jamie Blaine is an unconventional, and actually quite accidental, psychiatric crisis interventionist whose work takes him to "the least of these." A gifted storyteller, Blaine shares heart-wrenching and sometimes hilarious stories of everyday people who need to know God is there in their darkest hours-people dealing with secret shame, doubt, desperation, even suicide. Humans looking for wholeness, looking for Jesus.

Painting beauty where it seems none exists, Midnight Jesus helps readers transcend their own struggles, showing how truth can come from the strangest places. They will meet people like * Skeeter and Wookie, two homeless guys who show that community happens wherever there is shared need and a willingness to give * Pastor Ponder who holds an altar call after his sermon at the psych ward and says it's the best church service he's ever had * Kat, the tattooed hairdresser who dreams about Jesus and longs for spiritual connection, who shows that you can't judge a book by its cover * Jesus, who makes an invisible cameo in every story.

As Blaine writes, "I am one wrecked and dirty treasure, but God still decides I am worth the effort to save." Jamie Blaine is the kind of writer whose view of the commonplace transforms life into the transcendent.

The author takes us on a tour of not only his life, but gives us a glimpse into his world of working first as the midnight crisis guy who handles calls at all hours of the night then seeking out the one in trouble, then onto his “career” at the megachurch where truly, nobody has it all together.

Jamie’s writing style is very relatable and easy to understand. He writes with his heart and backs it up with his mind. I could really feel how he described to be feeling and agreed with every thought to each situation he wrote about that he faced. He really stretches your mind when it comes to his faith and how he uses it in his work as a psychologist.

This book makes you think. A lot. Are you comfortable to talk to Jesus like He is sitting next to you? Do you see him as a “friend?” The book is also difficult to put down because, well, it’s hilarious!  And y'all know I love to laugh. Jamie Blaine is a licensed sex and suicide specialist who has worked in psych wards, megachurches, rehabs, radio stations, and roller rinks. He is the non-fiction editor of the L.A. literary collective The Nervous Breakdown, contributor to the online faith magazine OnFaith, writer for Salon.com, The Weeklings.com, Bass Guitar magazine, Drummer U.K. magazine & America's best-selling street paper The Nashville Contributor.