The Day The Numbers Started To Matter

As I'm going on my journey, I'm going to be reposting some of my past posts...not only for you to read but because this girl needs to read them as well. So many things I need reminded of on a daily basis! This is one of my favorites... 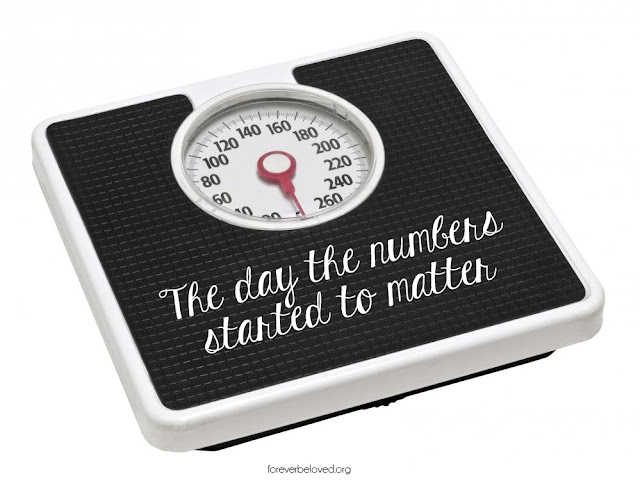 I was the girl in high school who wore a size 12 but had curves...curves that I hated, curves that caused me quite a few problems and curves that I wished so hard I could change. I was made fun of for any small flaw they could find...lips, booty, thighs. I spent my entire teen years wishing I was thinner. Oh, the years I wasted not appreciating what I had.

I remember one day in particular like it was yesterday. It was one of those spring days that make your soul happy...the birds were chirping so loudly, the sun was shining bright and the flowers were in bloom. And I was having a "thin day". We all know what those are, right? My hair was amazing, my outfit was cute and I was feeling good. It was the only day I ever felt comfortable enough to wear shorts to school. I walked out of the door to head to the bus and the sun was shining warmly on my face.  I couldn't get the smile off my face, I knew today was going to be a good day.

I got on the bus and sat in the seat with my best friend. She looked at me, skipped hello and how are you, and immediately asked a question.

How much do you weigh?

A question I had never been directly asked before. But she was my best friend, someone I trusted, so I told her. The look on her face said it all, she was horrified by my answer.  Her immediate response was saying she MUST go on a diet because she nearly weighs what I do. And THAT is not possible.

And in that moment, the numbers started to matter.

From that moment on, I've hidden that number deep in my heart. The only people that know it is God, myself and my doctor {who I've sworn to ultimate secrecy}. I could tell you story after story of people piercing my heart with their careless words about my weight...friends, relatives, boyfriends and even strangers.

I am one of those girls that likes to pretend that words don't hurt my feelings. I like to pretend I can just brush them off, smile and go on about my day. ﻿I take the hurtful words, cram them deep down inside and save them for another day. A day that I’m by myself and can pull those words back out and stress over them all by myself. Hurt doesn't have a time limit y'all. Words that were spoken 20 years ago still hurt just as much as if they were spoken yesterday.

But I've let those words, and that number, rule me for long enough.

There has been one common thread woven throughout all my weight loss ventures...scale obsession. Those numbers mattered to me so much that I had to see them daily. I just HAD to. My daily mood would then hinge on what that number on the scale was. So many days I would see a bad number then rush to the kitchen to eat out of frustration and disappointment, horrible self-talk in tow. This was a pattern that had to be broken this time.

I eventually cut it down to once a week, but I would still sneak on it two or three times throughout the week. I would tell myself I was "just checking" on how I was doing. Playing the same pattern I had when weighing daily. This, my friends, wore me out. My worth became what those numbers revealed.

A few months back, I was having some God-talk-time. Read this as a girl crying her eyes out at her Fathers feet, begging for help. He revealed to me to weigh once a month. And this girl sat up and listened.

One quote from the book Made to Crave really jumped out at me.

Wow. Powerful, huh? Actually reading that made my eyes overflow with tears. That number had held me captive for so many years, feeling free of it was emotionally overwhelming.  We are all so much more than a number!  And I refuse to let that number hold me captive anymore.


I can do all things through Christ which strengtheneth me.
Philippians 4:13